The popular monthly medals sponsored by Ron Evans Painting was held at the Lithgow Golf Club with two of the grade medals decided while the B grade medal will be played off next month.

B grade club champion for 2017 Travis Cameron, who has since made his way into A grade took out the A grade voucher and medal with a score of 70 nett. Runner up was the consistent Don Farnsworth on 71 nett on a countback.

The best scoring for the day came out of B grade with Des Roots who has been in the winner’s circle a couple of times of late counting out Bob Charlton when both recorded 69 netts. The pair will play off for the B grade medal during next month’s monthly medals.

The C grade medal and grade winner was Dean Stafford on 70 nett with the runner up being Robert “Darky” Millar back on 75 nett.

The best scratch grade scores were: A, Andrew Burton 74; B Gary Keen 81 and C “Darky” Millar who again showed his vast experience with a 95. Nearest to the pin awards went to sponsor Ron Evans on the second (121cms); Brian Giblett on the fourth (330cms); Greg Dykes on the ninth (224cms); Gary Wallace on the 13th (123cms) and Pat Wall on the 18th with a great 64cms. Balls in the ball competition went to those with 73 nett on a countback and better. 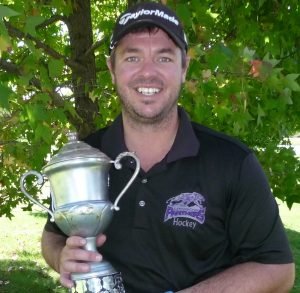